This week’s newsletter is sponsored by All the Books!

Keep up with the most exciting new books coming out each week with our All the Books! Podcast. YA, sci-fi, non-fiction, you name it, we cover it all.

Let’s talk some headlines, shall we?

If you’ve been wanting the full Hogwarts experience, you’ll want to keep an eye on the sorcerers of Mimbulus Mimbletonia. Next May, you could be practicing your wandwork and potion-making en français at their 4-day wizarding school. If only I had stuck with my high-school French! Which then leads me to wonder, does the language of magic have accents? What does a Beauxbaton levitation spell sound like? If anyone attends/has relevant information, please advise.

We are getting a new Middle-Earth story, and I have questions. But first, the actual news: It’s a previously unpublished novel about the adventures of Beren and Lúthien, written by J.R.R. and not Christopher. Now for my questions: Where has it been? We have had so much posthumous publishing from the Tolkien estate, it’s hard for me to believe that it’s taken this long for a full novel to come to light. I really want it to have been found in a secret compartment in his old writing desk, or perhaps a newly discovered wall-safe? As someone who did read The Silmarrillion (but not Unfinished Tales or Children of Húrin) and found it rough going, I’m also torn on whether or not to preorder a copy. What we already know about Beren and Lúthien is pretty great as backstories go — do I actually want more? Especially if it’s a (who knows how actually-finished) novel? This is something we all must decide for ourselves, I suppose. Regardless, it’s probably not going to be a good pick-up point for someone introducing themselves to Tolkien’s oeuvre.

What do we talk about when we talk about Turkish delight? That is not actually the title of this article but a girl can dream. JSTOR Daily offers us a lovely piece on why exactly Edmund would find Turkish delight the most compelling and wish-worthy of treats in The Lion, The Witch, and The Wardrobe. I spent most of my childhood believing it was some kind of pastry, who knows why.

And now, we need to talk about Dirk Gently. Dirk Gently’s Holistic Detective Agency and Long Dark Teatime of the Soul are my 2nd and 3rd favorite Douglas Adams novels (1st is Hitchhiker’s Guide to the Galaxy, 4th is Last Chance to See, in case you were wondering). With this in mind, I was originally very disheartened by the casting for HBO’s new series — while Samuel Barnett is very photogenic, he is neither portly, short, nor wearing a giant flappy hat. I tried to put that aside and give the pilot a chance; perhaps, like the movie, they’d capture the spirit rather than the letter. I am here to report that I tend to agree more with Vulture on this one after seeing the first episode, but the AV Club is holding out more hope (and has seen the first three eps). HBO did nod to the books but also made it clear that previous knowledge of the character and series is not required; your mileage may vary, but I recommend you proceed with caution.

Alright, onto this week’s reviews.

The Long Way to a Small, Angry Planet and A Closed and Common Orbit by Becky Chambers 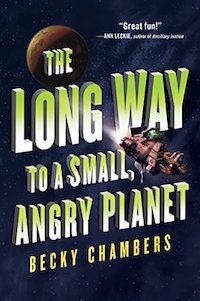 Oh, friends. If you have not read these two books yet, can I just say how jealous I am of you? And if you have only read Long Way, I am so delighted for you to read the sequel! Which is available RIGHT NOW in ebook (but not in print until March 14, 2017). In Long Way we meet the crew of the spaceship Wayfarer, a motley group of humans and aliens who just want to dig wormholes and be left to their own devices. Yes, you read that correctly: in Chambers’ world, people travel across the universe via wormholes and they can be manufactured. And while the world-building (universe-building?) is solid and enjoyable, this is a character-driven story at its heart. Where the various crew members came from, what they’re doing out in the black, and how they stand working with each other fill up the bulk of the plot. 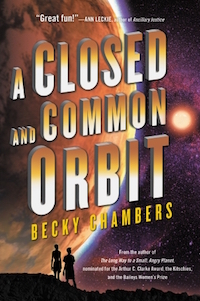 Some of them we find out more than others, and some we’re left wanting more — enter A Closed and Common Orbit! It picks up where the previous book leaves off, but we’re no longer on Wayfarer; instead, we’re taking off with two minor characters for a fringe community of hackers, modders. Chambers is asking big questions about both technology and personhood — cloning and artificial intelligence and the logical extensions thereof come under close scrutiny.

If authors like NK Jemisin are busy ripping our hearts out (in the good way), Becky Chambers’ work is more likely to put it back into your chest and fill it with warmth (also, obviously, in the good way). These two books are the perfect escape from the tensions and stresses of this year: enough action to drive the plot along, and a ton of characters to root for.

The Chimes by Anna Smaill 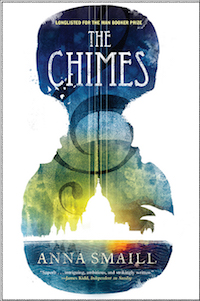 The Chimes recently beat out a truly amazing roster of novels (including personal favorites The Fifth Season and Uprooted) for the 2016 World Fantasy Award, so of course I had to pick it up. After reading it, I am somewhat astonished no one shoved it at me in the last year because it’s exactly in my wheelhouse. It takes place primarily in a London that could be our dystopian future, or an alternate timeline, where music is the primary metaphor and memories must be captured externally to be kept. It takes some getting used to the language of the novel: things happen subito instead of suddenly, or lento instead of slowly. If you’re a classically trained musician (like the author) you’ll be fine; if not (like me), you’ll pick it up through context sooner or later. Our young narrator, Simon, finds himself in London on a half-remembered mission from his dying mother without friends, resources, or a plan. It’s especially hard to have a mission or a plan when your memories are wiped clean every day. But the mission finds Simon via his new-found ally Lucien, and he begins to unravel the truth about his own life and his world.

Smaill’s achievement lies in creating a dystopia that feels completely new — I don’t remember ever reading about the beauty and dangers of sound in the ways she lays them out. Simon is a wonderful narrator, and I got attached to the supporting cast as well. This is an absorbing, compelling read, and one that very well could change the way you think about your playlists, the whine of your refrigerator, that song stuck in your head.