First things first:
– A correction is called for; despite it being on the cover image and everything, I had Lara Elena Donnelly’s name wrong last issue. Mea culpa!
– And a MUPPET ARMS! The Nebula has announced the 2016 nominees and I cannot stand how excited I am about the list for Novel. I have read all but Borderline (must get on that) and could not agree more with their nominations! I am trying to ration exclamation marks but it’s not working!?!

For today’s issue, I have a book listicle spectacular for you. Ready, set, TBR:

I have no real feelings about 50 Shades of Grey but I do love this post about eight sci-fi/fantasy books sexier than it.

Here is a list of Middle-Eastern inspired SF/F and while it’s light on authors actually from the Middle East, I extremely cosign their recommendation of Alif the Unseen. Before she was the pen behind Ms. Marvel, G. Willow Wilson wrote a killer tech-punk action novel, plus genies! It’s also one of the few books out there that plays equally with technology and fantasy.

Want some comics that scratch the fantasy itch? Christine has five recs for you. Points of interest: Mike Carey is the same writer as M.R. Carey (The Girl With All The Gifts) and Marjorie Liu is the author of the Hunter Kiss urban fantasy series as well as Monstress. Multi-tasking!

Japanese speculative fiction in translation! I’ve been a fan of Japanese noir for some time, but haven’t delved much into speculative fiction yet, so this is exciting. I have my eye on Mr. Turtle in particular, as the Teenage Mutant Ninja Turtles were very important in my formative years.

And finally, how about some color on the silver screen? Jessica has a wish-list of diverse fantasies she’d love to see adapted.

Speaking of things I’d love to be adapted… 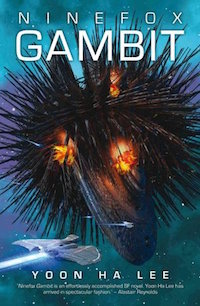 Wow, you guys. SERIOUSLY WOW. This space opera belongs on your shelf next to the works of China Mieville, Iain M. Banks, and Cixin Liu. The sequel The Raven Stratagem comes out in June and I will be counting down the days. (Bonus: just listed for the Nebula Award for 2016 Novel!)

Captain Kel Cheris has kept her head down and worked her way quietly through the ranks, but a battle with heretics that goes sideways draws the attention of the higher-ups to her mathematical talent. Her skills get her assigned to a mission that is all risk and little reward, and which requires her to be pseudo-possessed by the centuries-old ghost of a brilliant and insane tactician. (And this is me simplifying the plot!)

Lee has built an empire in space in which the mechanics of calendars are all-important, heresy not only disrupts governance but changes the way the universe works, and everyone’s motives are inscrutable and suspect. The action sequences are intense, the plotting is top-notch, the conspiracies are shocking, and the characters are fantastic. Truly, I do not have superlatives enough to tell you how much I enjoyed Ninefox Gambit. 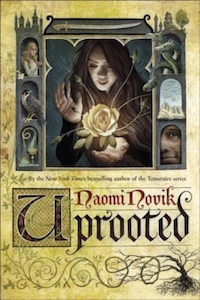 This one made the rounds of favorites when it came out in 2015, but I recently ran into someone who hadn’t read it yet and it reminded me that some of you might need a push! Naomi Novik is best-known for the Temeraire series, which just recently came to an end (long live fussy dragons during the Napoleonic wars!), but this stand-alone novel is gorgeous.

Inspired by a Polish folktale, Uprooted follows a young woman named Agnieszka as, against all expectations, she is chosen by a wizard to be his … housekeeper? Kind of? In exchange for a village girl every ten years, the Dragon (title, not literal dragon) protects the village from the ravages of the very-angry forest on its borders. Agnieszka is not expecting to be taken since she’s neither the most beautiful nor graceful nor bravest nor, well, you get the idea. But what she has in spades is moxie, and is thus the perfect person to star in an epic adventure.

There are a bunch of twists and turns to this fairytale rewrite, which always makes me happy. Novik knows the tropes well and isn’t afraid to spin them around until they lead off in unexpected directions. Evil forest, terrifying wizard, plucky young heroine, royalty in peril: all are there, but none are what they seem. And while the ending is satisfying, I hope someday that I get to return to Agnieszka’s world. Maybe now that Novik is done with historical dragons, we’ll get a sequel?

This newsletter is sponsored by our giveaway.

We’re giving away a pair of Apple’s fancy new AirPods (which are an audiobook lover’s dream). Enter here for a chance to win, or just click the image below: