Happy Friday, geek friends and nerd pals! I have been scouring the interwebs for interesting tidbits, and boy did I find some.

First and foremost: The Hugo Finalists are heeeeeeere! You will notice some repeats from the Nebulas, which is neither unusual nor unexpected in these cases (Obelisk Gate and All the Birds in the Sky, what what!). If you want a look at how the rules changes from last year may have affected this year’s nominations, our own Alex is happy to oblige.

There are always trend pieces making the rounds, but I happened to see three in a row. Things what are Hot Right Now: dystopias, space opera, and killer flus. (Not mutually exclusive, let us note.) Dystopias always seem to be on-trend to me, but I welcome additions to the ranks. Space opera, on the other hand, does seem to be having its day in the Sun (heh); Wired and I have a lot of the same favorites, which means you should definitely read them. And killer flus are like little black dresses — perennial and inescapable. If that’s all a little heavy for you, have some talking cats too.

Speaking of space opera! There’s a gorgeous new cover for Ann Leckie’s forthcoming Provenance, which we will not get until October, argh. If you haven’t read the Ancillary trilogy, never fear: this is a new story, so you can jump right in. But you have several months between now and October, so you definitely could read them, I am just saying.

And last but not least, here is a sci-fi short film that I found delightful and eery as all get-out, plus it is only five minutes long: Strange Beasts.

Now for recommendations! Here’s something brand new and something old (because in publishing, 2015 was like a decade ago).

The Wanderers by Meg Howrey 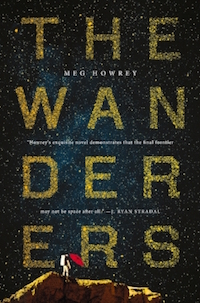 Ambiguous near-future astronaut stories are also hot right now! We just talked about Spaceman of Bohemia, which I read back to back with The Wanderers. Whereas Spaceman goes unabashedly surreal, Wanderers sticks hard to the science-possible. Three astronauts from around the world are hired by a private space-exploration company called Prime Space (it’s all very Elon Musk) and sent into a seventeen-month-long simulation to prove that not only is a landed mission to Mars possible, but they’re the right crew. As the story — told skillfully from multiple points of view — develops, astronauts Helen, Sergei, and Yoshi each develop a different view of what is actually going on.

There are comps to be made with The Martian; Howrey gives us technical action, company politics, and pencil-pushers as well as problem-solving and astronaut body-humor. But she also delves deeply into the emotional fault-lines of her characters, which gives us some of the funniest and most moving moments (occasionally at the same time!). Helen’s grown daughter Meeps, a struggling actress, absolutely steals every scene she is in, as does Yoshi’s wife Madoka. And Sergei’s sons, oof! My heart breaks. So, to wrap this up, my short recommendation is: come for the Hijinks Involving Space, stay for the incredible characters.

The Buried Giant by Kazuo Ishiguro 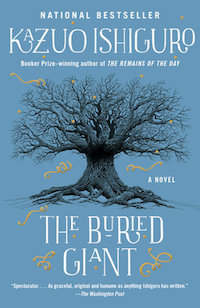 Ishiguro excels at writing books that are not at all about what they seem to be about, as you know if you’ve read Let Me Go. That one appears to be about boarding school and is actually about, ahem, medical ethics (I am resisting the urge to spoil it for you, you’re welcome). The Buried Giant does not actually have a giant in it — ogres yes, pixies yes, knights yes, dragons yes!, but not a giant to be found. For a while you’re pretty sure it’s just about two olde time British people who can’t remember anything, then it’s about King Arthur, and then you get to the ending and it’s about — Well, I don’t want to spoil it, but it wasn’t what I thought.

And yet despite all of this confusion and ambiguity (which ultimately does have a point), I couldn’t put it down. The Buried Giant is a dreamy walk through an ancient England that barely knows itself from one day to the next, and that contains surprises both wondrous and horrible around every turn. From the troubled relationship between the Saxons and the Britons, the role of the early Catholic church, the long-deferred quest of Sir Gawain (who I could not help picturing as a Monty Python-era John Cleese), to the perils facing an aging couple in a harsh world, Ishiguro balances a ton of depth with a deceptively simple style. A slow burn of a novel, this one is for Ishiguro fans, readers who enjoy open-ended plots, and my fellow Arthurian completists.

This newsletter is sponsored by Macmillan Teen.

We have a YA Science Fiction & Fantasy prize pack to give away! Click here to enter for a chance to win, or just click the image below: