I’m not even going to name any of the extreme right-wing books assigned to students taking an AP Government class in an Alabama high school. The reading list, assigned by teacher Gene Ponder (who ran an unsuccessful 2010 campaign as a Republican candidate for Alabama lieutenant governor), was pulled from Spanish Fort High School’s curriculum after it went viral. One look at the list and you’ll see why it prompted the mother of a student in said class to post it in a private Facebook group for local progressives. After retracting the list, the Baldwin County superintendent said it had not been approved by the school system … but the list has been around and assigned for three years. Applause to Julia Coccaro, a senior and founder of the Spanish Fort High School Democrats, who said, “The point of AP is to teach how to think, not what to think. I’m going to fight for that.”

It was anti-feminist trolls versus Australia’s literary community and guess who won? After the Australian feminist author of Fight Like a Girl, Clementine Ford, announced that she’d signed a contract to write her second book, indie Brisbane bookstore Avid Reader decided to share the happy news on Facebook. The nasty comments and one-star reviews followed, with one troll crying out that the store promotes “misandrism.” Enter fans of the store and of Ford, arriving in great numbers to give Avid Reader more than 2,700 five-star reviews, far outweighing the one-stars from “‘men’s rights’ swamp monsters.” And Avid Reader’s responses to the comments on the page? On point.

Amazon released data showing that, in terms of sales, Hufflepuff merchandise came in last place after Gryffindor, Slytherin, and Ravenclaw (in that order), all part of the Harry Potter franchise. It seems damning, and the article certainly makes it sound that way, but Hufflepuffs might simply be rare, precious doves. On a side note, and unsurprisingly, data also showed Dumbledore is the only character in the franchise to feature in the top five most highlighted passages on Kindle.

Earlier this year, it was books like Mom & Me & Mom, The Color Purple, and My Life on the Road in London and New York, and around the world. Now, Emma Watson, Book Fairy, is hiding copies of Margaret Atwood’s The Handmaid’s Tale around Paris. Previously, Watson teamed up with Book Fairies to leave feminist books for readers to find in surprising places as part of an International Women’s Day event; she’s also hidden books for her book club Our Shared Shelf.

Thanks to Random House, publisher of Who Is Rich? by Matthew Klam, for sponsoring this week’s newsletter. 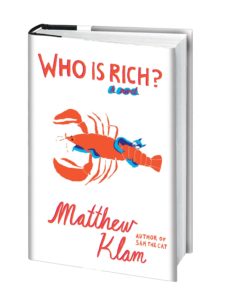