A Guide to Global Reading Habits

How does your country stack up when it comes to literacy? Global English Editing created an infographic ranking 2016 literacy worldwide. Winner winner chicken dinner goes to Finland. The U.S. came in in 7th place, and Canada was 11th. You can take a look to see where other countries fell (ranked from one to 20), reading habits snapshots, which countries read the most; also check out the top 21 best selling books worldwide. Don Quixote, really? Maybe I’ll give that one another try…someday.

Thought You Knew Everything About the Harry Potter Books and Films?

I can’t help but think someone out there will take a look at this list of 10 things you never knew about the Harry Potter books and films, and say, “Yeah I knew that.” I mean, we are talking about Potterheads, are we not? A couple fun facts: Daniel Radcliffe’s extreme reaction to contact lenses was behind the book-to-film eye color discrepancy, and Rowling regrets coupling Ron and Hermione (please don’t write an alternate ending, Rowling. Please.). But hey did you know Michael Jackson had an idea for the series that Rowling gave the thumbs down?

Rupi Kaur revealed the cover of her second book of poetry, The Sun and Her Flowers, on Twitter. There, Kaur posted a series of photos in which she’s shirtless (topless sounds gross, doesn’t it?), sporting the cover illustration on her back. Don’t worry, there’s nothing lewd or creepy about these photos. I found the exhibition clever and effective. Poets, man. They know how to spin spare.

But Did You Actually Read Chaesikjuuija?

So…according to numerous reports, the translated version of Han Kang’s The Vegetarian, winner of the 2016 Man Booker International Prize, is chockablock full of translation errors. Okay, maybe chockablock is an over-exaggeration. Or, I don’t know, maybe not: “According to a research paper presented last year at a conference at Ewha Womans University, 10.9 percent of the first part of the novel was mistranslated. Another 5.7 percent of the original text was omitted.” Just for the first part of the novel, mind you. Examples in the article cite the numerous embellishments made by translator Deborah Smith, who started learning Korean only six years prior to translating the book. It’s an interesting piece that examines how the freewheeling translation may have contributed to the books success in Western countries.

Thanks to The Disappearances by Emily Bain Murphy, a HMH Book for Young Readers, for sponsoring this week’s newsletter. 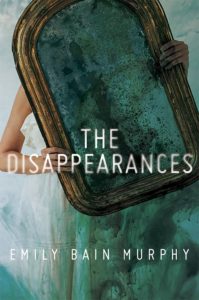 Every seven years something disappears in the town of Sterling: reflections…dreams…colors. When Aila arrives, she learns the town is cursed to lose experiences that weave life together…and the theory is that Aila’s deceased mother, Juliet, is to blame.

Aila sets out to clear her mother’s name with the help of George, whose goofy charm makes him a fast friend; Beas, the enigmatic violinist who writes poetry on her knees; and William, whose pull on Aila’s heart terrifies her.

The Disappearances is a bewitching tale full of intrigue and dread that will leave you entranced.