Time May Change Me, But I’ll Read More Books

Penguin Random House compiled a list of 40 books to read before you turn 40, and all I’ve been hearing lately is the susurration of falling sand. The books include nonfiction, fiction, and poetry, and their inclusion means that the book is a worthy champion when you’re looking for help navigating career, family, or loss. They also kindly threw in a few essential classics that I will likely request be entombed with my cold, quiet body in case I have an opportunity to shred my TBR. The list includes A Little Life by Hanya Yanagihara, A Brief History of Seven Killings by Marlon James, and Homegoing by Yaa Gyasi. Can we pepper this list with some books about refusing to grow up?

Study the mind of a master courtesy of the digitized notebooks of Leonardo da Vinci. Thanks to the British Library and Microsoft, you even get an interactive feature that allows you to turn the pages of the notebooks with animations. And with glosses available onscreen, readers are privvy to explanations of the dainty notes scratched around the technical drawings, diagrams, and schematics. Once upon a time (not very long ago), few people had access to the Codex Arundel. Who knows? It might inspire someone to invent the next great bookish device.

Chawton House, which houses Jane Austen manuscripts and a library of early women writers, has begun fundraising to become a major historic literary landmark. In the 90s, the Great House was restored and reopened as a home for early women’s literature, but the foundation that had provided much of the financial support to keep it open is focusing on other projects. The folks behind the fundraising effort sound optimistic and excited about turning the house into a literary destination, which is heartening. If they’re looking for a volunteer to house-sit and host massive, themed tea parties: right here.

How To Make White People Uncomfortable By Seattle Seahawks Star

Seattle Seahawks football player Michael Bennet is going to publish a memoir titled How to Make White People Uncomfortable next year. Bennett is a supporter of the Black Lives Matter movement, and social justice issues. Co-writer Dave Zirin said the book will cover “the NFL, racism, sexism, intersectionality and athletes being no longer silenced.” This is not going to be one of those quietly published numbers.

Thanks to Penguin Books, publisher of The Dying Game by Asa Avdic, for sponsoring this week’s newsletter. 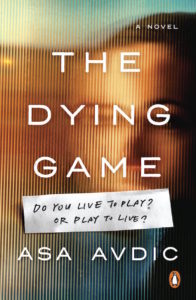 The year is 2037. The Soviet Union never fell, and much of Europe has been consolidated under the totalitarian Union of Friendship. On the tiny island of Isola, seven people have been selected to compete in a forty-eight-hour test for a top-secret intelligence position. THE DYING GAME is a masterly locked-room mystery set in a near-future Orwellian state—for fans of Margaret Atwood’s The Handmaid’s Tale, Dave Eggers’ The Circle, and Suzanne Collins’ The Hunger Games.