Good news for fans of the newest Anne of Green Gables adaptation, Netflix has ordered a second season of Anne With an E, which means more stark aesthetic, troubling flashbacks, and moon-eyed Gilbert Blythe. I think some of us will watch an Anne adaptation no matter how far it strays from the original material. Some of us meaning me. Cool sidenote: Season 2 features an all-women writing team.

How Much Do You Needed A Harry Potter/Breakfast Club Mashup?

You’ll know after watching Mashable’s farcical trailer for Harry Potter in the style of The Breakfast Club. The HP gang is up to some John Hughes level high jinks with all the tropey characters represented, including Snape as Mr. Vernon. The ending will be bittersweet and feature a New Wave song that will give you grief every time it takes its turn on your Remembering Yesterday playlist.

Philip Pullman wants to reintroduce fixed book prices to protect independent bookstores. I didn’t know anything about Britain’s Net Book Agreement until this article. Said Agreement required that all books be sold at the same price, aside from occasional discounting in special circumstances. Some, including indie booksellers, bemoan its 1997 dissolution. And when indie shops complained about the heavy discounting on La Belle Sauvage, the first in Pullman’s Book of Dust series, the author himself stepped in to say he wants to reintroduce the minimum price and called indie shops “the lantern bearers of civilisation.”

Get Ready, Get Set, Get Organized

The Millions has kindly offered us ten ways to organize our bookshelves. My current organizational system involves finding the closest open shelf space for any given book in my hand. But, for the more organized (or prospective candidates), you may elect to shelve by color, by importance, or with spines facing the wall for secrecy (what?!).

Thanks to See What I Have Done by Sarah Schmidt for sponsoring this week’s newsletter. 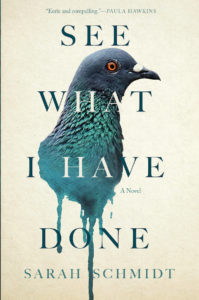 Lizzie Borden took an ax
And gave her mother forty whacks.
When she saw what she had done,
She gave her father forty-one.

In this riveting debut novel, See What I Have Done—which is already gaining outstanding acclaim—Sarah Schmidt recasts one of the most fascinating murder cases of all time into an intimate story of a volatile household and a family devoid of love.