When You Sue LeVar Burton for Using the Reading Rainbow Catchphrase; When You Have No Soul

Whoever is leading WNED-TV Buffalo, New York’s campaign to sue LeVar Burton for using the catchphrase, “But you don’t have to take my word for it,” must not have been raised on Reading Rainbow. Because how could you? Burton has used the phrase on his new podcast for grown Rainbow readers, LeVar Burton Reads. Let’s get real, WNED, Burton is Reading Rainbow.

I want to spend a day inside Chuck Palahniuk’s head. Wait, no I don’t. Wait, yes I do. Hmm. Palahniuk is certainly an Eccentric, so are we even surprised that he hid a time capsule in his former home? Well, the current owners found Chuck’s Horcrux, and in it…a signed copy of Fight Club, some family photographs, and more randomness. I have a sneaking suspicion Palahniuk was disappointed when he heard the news. Disappointed that a strange, unconventional future society of curiously haunted Portlandians didn’t stumble upon it. Plant another and give it maybe 10 years.

After Brandon James/Princess Onya Mann applied to host a drag queen story hour at the Charlotte Mecklenburg Library in Charlotte, North Carolina, a conservative citizen group called Keep NC Safe lashed out on Facebook. “Males dressing in women’s fashion or in a feminine manner is shameful and that sort of shameful behavior should not be sanctioned by public libraries,” said one commenter (as someone passed around the smelling salts, I imagine). I hope Keep NC Safe never applies to host story hour because won’t somebody think of the children?

The “Let’s Pretend It Doesn’t Exist” School of Survivalism

“I find it very telling how little these worlds that are so much about power and oppression and ways of resistance also magically somehow have solved race,” said Daniel José Older in a Vulture article titled, “Why Don’t Dystopias Know How to Talk About Race?” The article examines the inexplicable absence of conversations about race in dystopian storytelling, where the genre seems to rely on the concept that things get so dire and survival becomes so important that other issues (like, you know, the small matter of racism) are superseded. Yeah, suspension of disbelief is not go.

Thanks to Other Press for sponsoring this week’s newsletter. Read The Die is Cast, the first book of the Leona trilogy, by the “queen of Nordic noir” Jenny Rogneby. 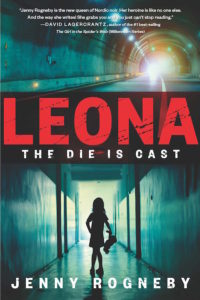 This best-selling Scandinavian thriller follows its troubled heroine as she investigates a high-profile robbery for Stockholm’s Violent Crimes Division. A hardboiled crime novel, filled with unexpected twists and turns, featuring an unusual heroine. Leona makes for gripping reading while challenging feminine norms and questioning what is behind the choices we make. Millennium Series author David Lagercrantz calls Jenny Rogneby “the new queen of Nordic noir.”