Which Harry Potter Character Myers-Briggs Type Are You?

Well I did not expect to get Hagrid, but you are who you are. Now where did I put that baby dragon? Geekology designed a fun and fantastic Harry Potter MBTI chart. If you don’t know your Myers-Briggs type, there’s also a link to the test on the page. Are you sweet-natured, gullible INFP Luna Lovegood? Pessimistic, self-confident INTJ Draco Malfoy? Only one way to find out.

I Hate Chemistry, But I Love This Periodic Table Of Literary Villains

It’s a chart frenzy, my friends! I would need the after-school tutorial to properly understand these elements if this periodic table of literary villains wasn’t pure entertainment. The funnest part (for us, not for them)? They’re ranked here according to a version of Dante’s circles of hell. Clever, clever book nerds. See where classic villains, including Grendel and his mother, Count Dracula, and Lady Macbeth, fit in.

N.K. Jemisin Is On Fire

The news this week was that N.K. Jemisin won her second Hugo in a row for Best Novel, a feat that hasn’t been accomplished by an author since Lois McMaster Bujold won in 1991 and 1992. Jemisin, who won the award for The Obelisk Gate this year, also became the first black person to win the Hugo award for Best Novel with the first book in The Broken Earth trilogy, The Fifth Season. Jemisin’s win, and the strong showing from women this year, came as a huge relief after the nightmare of the puppies… (Psst! This wasn’t in the Hugo news, but we also learned that The Fifth Season is going to be adapted for television!)

Where on the villains chart shall we place the “alt-right” trolls who entered radical bookstore Bluestockings to plant copies of Milo Yiannopoulos’ book on their shelves, and proceeded to act aggressively toward staffers when they were asked to leave? The individuals made taunting statements, and baited the volunteer staffer to call the police. Meanwhile, Bluestockings responded admirably and posted a statement detailing the awful situation. Let’s put the trolls next to Satan on the chart–“Not today!”

Thank you to If The Creek Don’t Rise by Leah Weiss for sponsoring this week’s newsletter. 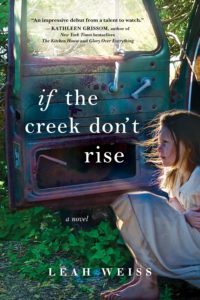 Sadie Blue has been a wife for fifteen days. That’s long enough to know she should have never hitched herself to Roy Tupkin, even with the baby.

Sadie is desperate to make her own mark on the world, but in remote Appalachia, a ticket out of town is hard to come by, and hope often gets stomped out. When a stranger sweeps into Baines Creek and knocks things off kilter, Sadie finds herself with an unexpected lifeline…if she can just figure out how to use it.