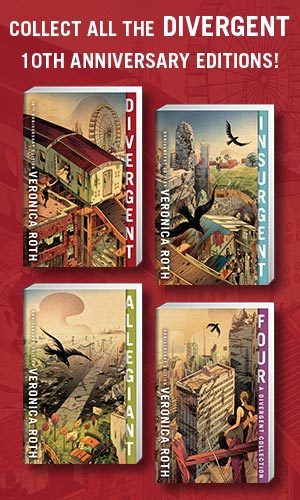 Celebrate the 10th anniversary of Divergent with special editions of the #1 New York Times bestselling series that captured the hearts of millions of readers. These editions feature exclusive content from Veronica Roth and beautiful reimagined cover art. Beatrice Prior’s society is divided into five factions—Candor (the honest), Abnegation (the selfless), Dauntless (the brave), Amity (the peaceful), and Erudite (the intelligent). Beatrice must choose between staying with her Abnegation family and transferring factions. Her choice will shock her community and herself. But the newly christened Tris also has a secret, one she’s determined to keep hidden, because in this world, what makes you different makes you dangerous.

Happy June! I hope you enjoyed your long weekend and that you got some extra great reading in! I listened to the audiobook of The Knockout by Sajni Patel and it was fantastic! Definitely pick it up if you enjoy hardcore girls in sports and great coming of age stories about identity and big dreams.

Let’s dive into the news and new books, because there’s a ton of both!

TikTok is named a big driver behind YA book sales.

The Books for Palestine relief auction is running now. Bid on items donated by the kidlit community to raise money for the Middle East Children’s Alliance and the Palestine Children’s Relief Fund.

Ibi Zoboi is writing a Black Panther YA novel! It will star a young Okoye. It’s called Okoye to the People and it’s available for preorder.

Talk about empowering: A group of trans and non-binary teens came together to write a children’s book about inclusivity!

YA author Rachel Lippincott shared her own journey in completing the bucket list found in her new novel, The Lucky List.

A reminder: June is officially Pride Month, so don’t forget about the Pride Book Fest happening this month!

Ace of Spades by Faridah Àbíké-Íyímídé

Better Together by Christine Riccio

The Darkness Outside Us by Eliot Schrefer

An Emotion of Great Delight by Tahereh Mafi

Gamora and Nebula: Sisters in Arms by Mackenzie Lee

The Ghosts We Keep by Mason Deaver

The In-Between by Marc Klein

The Nature of Witches by Rachel Griffin

A Night Twice as Long by Andrew Simonet

One Great Lie by Deb Caletti

The Passing Playbook by Isaac Fitzsimons

Simone Breaks All the Rules by Debbie Rigaud

A Sisterhood of Secret Ambitions by Sheena Boekweg

Speak for Yourself by Lana Wood Johnson

Sunny Song Will Never Be Famous by Suzanne Park

The (Un)Popular Vote by Jasper Sanchez

We Are Inevitable by Gayle Forman

We Can’t Keep Meeting Like This by Rachel Lynn Solomon

The Witch King by H.E. Edgmon

14 Ways to Die by Vincent Ralph

The Betrothed by Kiera Cass

This Book is Gay by Juno Dawsom

The Shadow Wand by Laurie Forest

Some Kind of Animal by Maria Romasco-Moore

A Song Below Water by Bethany C. Morrow

Unravel the Dusk by Elizabeth Lim

When We Were Magic by Sarah Gailey

When the Ground is Hard by Malla Nunn

You Should See Me in a Crown by Leah Johnson

Listen to me talk about the importance of community this Pride season, and some books that exemplify that!

Dark coming of age YA—why is it important?

What to read after you read and watch Shadow and Bone!

Thanks for hanging out!
Tirzah