This week I want to share my love for a recent horror title that not only introduced me to an exciting voice in international horror but also – kind of ironically, given the subject matter – rekindled my love of hiking.

Now I’m a casual hiker at best, but it’s sort of an unavoidable hobby when you grow up in a valley, surrounded by some of the best hiking in your state. (Okay so maybe I’m a little biased). The teachers used to get permission to pull our whole class out of school for a day at least once a year and take us on a “field trip” to one of the nearby peaks for a hike. And though our summits are a LOT shorter than the alpine peaks in this month’s book recommendation, the view was still pretty amazing. Nothing beats standing on an exposed summit, feeling small and infinite at the same time.

But I got older, and we moved away, and I sort of lost touch with my outdoorsy side. This year, however, thanks in part to the little flame of wanderlust that this book set alight in my brain, I’m climbing the walls Exorcist-style waiting for warm enough weather to get out to the mountains. Which is why this month’s must-read horror recommendation absolutely has to be Thomas Olde Heuvelt’s gorgeous, epic mountaineering horror novel, Echo. 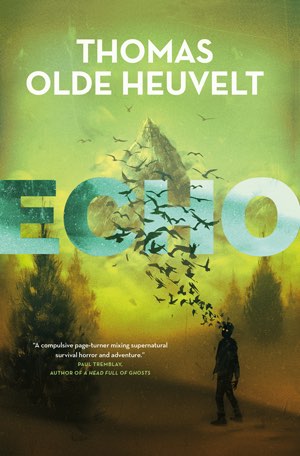 Heuvelt’s novel was originally published in Dutch in 2019, and was translated by Moshe Gilula for its English debut with Tor Nightfire earlier this year. If you’ve read the synopsis, you know that Echo is about a journalist and mountaineer – Nick Grevers – who survives a tragic encounter with a remote mountain, the Maudit. But in the aftermath of the (supposed) accident that killed his climbing partner and left Nick’s face grievously scarred, he begins to suspect that something far more sinister than a fall may have taken place up there on the face of the mountain. Something he cannot remember. Something that might have come home with him.

If you’ve only read the published synopsis, then you won’t yet know about the other main character in Echo: Sam. Sam is Nick’s boyfriend. He’s also the only one who believes that something dark and more dangerous than grief is haunting Nick. Together they journey back to the valley below the mountain, searching for answers to what happened up there, and for a way to save Nick before the shadow of the Maudit swallows him completely.

I have to laugh, because I don’t think the goal of a book about an evil mountain is to leave its readers with the urge to then go climb a mountain. Logically, you’d probably want to do the opposite. Go away from the mountains. Go down in elevation. But Heuvelt’s lush, lyrical prose renders the many alpine landscapes of Echo in such breathtaking beauty that it’s hard to imagine how you wouldn’t be inspired. Which isn’t surprising when you consider Heuvelt’s own background as an avid mountaineer. And in the contrast between Nick’s love of the mountains and Sam’s fear of them, Heuvelt’s descriptions of the mountains in Echo embody the Gothic sublime, detailing landscapes both awesome and terrible at once:

“I hated the way they closed in on us. The way there were leaning over the plane. Tearing right through the storm, jagged like a predator’s teeth.” (15)

“The Zinalrothorn is a splendid peak, a tremendous monolith that, like the ruins of an ancient castle wall, towers above the surrounding glacial basins […]” (47)

But at its heart, Echo isn’t solely about a cursed mountain. In fact, it’s really not about the Maudit at all. It’s the story of two people – two messy, imperfect people who couldn’t be more different – who love each other. Two people caught up in impossible, cosmic forces beyond their control. It’s a story about grief as much as ghosts. I have always preferred my horror to have an abundance of heart. I want to be as likely to cry as I am to get the creeps when reading, and Heuvelt gave me both.

Echo is one of those horror books that’s so excruciatingly gorgeous that it sticks to your memory like glue long after you turn the last page. I think of this book on a weekly basis, at least, and even though I just had the pleasure of reading it for the first time in January, I can already feel the need for a re-read.

So if you’re looking for something unforgettable to add to your Spring TBR, look no further than Thomas Olde Heuvelt’s Echo. Just make sure you have your hiking books ready. You might want them by the time you’re done.

Have you SEEN the cover reveal for Alexis Henderson’s forthcoming novel House of Hunger? It’s so goooooooooooooorgeous.

V. Castro was on Latino Slant the other day talking about her forthcoming novel, Aliens: Vasquez.

Over at Ladies of Horror Fiction, Cassie has some amazing dark poetry collections to recommend based on your favorite horror themes!

Apex Magazine is fundraising for a compilation anthology of all the dark and weird fiction they published in 2021, if you’re looking to throw a little love at an indie publisher.