It feels like it’s been a hot minute. But really it’s only been a week. I hope you had a good weekend, if you got to have a weekend. I actually have a little trip happening this coming weekend, so I just took it easy. I spent some time in the ‘ole reading chair. Watched some House of the Dragon. Caught up on Only Murders in the Building. You know the drill. Anyway, somehow it’s almost the weekend again, so let’s hop into this book talk while we still have time.

Let’s start with a totally adorable cover reveal. Here’s the cover of Adiba Jaigirdar’s latest, The Dos and Donuts of Love. It’s out in June, and you can preorder it now!

And LGBTQ Reads has the exclusive cover reveal for Venom & Vow by Anna-Marie McLemore and and Elliott McLemore. This is a trans YA fantasy releasing from Feiwel & Friends/Macmillan on May 16, 2023.

New York Times bestselling author and former monk Jay Shetty has announced his next book, 8 Rules of Love: How to Find It, Keep It, and Let It Go.

Macmillan Audio is releasing a special audio version of rock musician Nick Cave’s Faith, Hope and Carnage. The audiobook is scheduled for release on September 20.

Little, Brown has purchased Emma Donoghue’s Learned by Heart, a work of historical fiction set to publish in August 2023. According to the publisher, the novel is about “the real-life love story of historical figures Eliza Raine and Anne Lister.”

Here’s a sneak peek at Anissa Gray’s upcoming novel Life and Other Love Songs. This book will be out on April 4, 2023.

Mila Kunis is set to star in The Luckiest Girl Alive, Netflix’s film adaptation of the New York Times bestselling novel of the same name by Jessica Knoll. The movie will premiere in theaters in September ahead of its streaming debut this fall.

According to George R.R. Martin, House of the Dragon has “fixed” one of his least favorite scenes from HBO’s Game of Thrones series.

Do you know your state’s favorite Stephen King movie? Check out this map to see which movie each state is searching for most often. 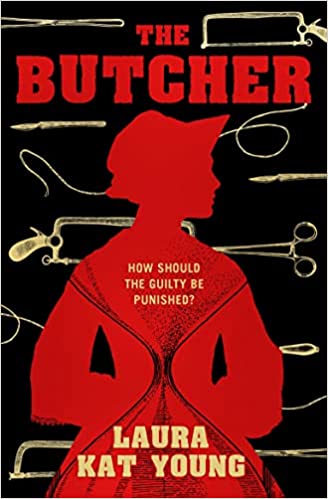 Let’s just start off by saying I love the comps for this one. This book’s got me written all over it, and hopefully you’ll be excited about it too! You see… The Butcher is being described as Shirley Jackson (check) meets Devil’s Day by Andrew Michael Hurley (check check) meets West World (Okay, I haven’t watched the most recent season, but I am into it, so check, check, check). This sounds like such a fun combo, and this one is coming out soon. So if it sounds good to you, you’ll be able to pick it up by the end of the month!

If you somehow need more information before you’re totally sold, here’s the deal. After Lady Mae turns 18, she will be inheriting her mother’s job as the Butcher, dismembering Settlement Five’s residents who commit petty crimes. But when Lady Mae’s mother is called upon to butcher a six-year-old boy, and then she refuses to do it, she is murdered for refusing her duties. Now alone in the world, Lady Mae must take her mother’s place.

This is Laura Kat Young’s debut novel, and it’s definitely worth preparing your shelves for this one. Still want more? Check out an excerpt here.

“Pity fades with age, hate is lost and found, but guilt can last a lifetime.”

I know we normally save memes for Mondays, but with the onslaught of Don’t Worry, Darling memes following that wild premiere, I really could not help myself but share these. So enjoy this special edition of “Monday Memes,” cleverly titled “Thursday Memes.”

And if for some reason you’re behind on the Don’t Worry, Darling drama, you know Jess Owens will fill you in. Bless her.

The reading chair is once again the star of the show with these cats. I love how they’re sitting together but not without the help of a pillow to keep them separated. I mean, whatever keeps the peace.

Anyway, I hope you all have a wonderful weekend! I’ll be taking the train to Portland this weekend, so I’m envisioning reading my book (Clay McLeod Chapman’s Ghost Eaters), enjoying the view, and just relaxing. I’ll see you back here on Monday, yes?