Welcome to Check Your Shelf, where it’s time to play everyone’s favorite game: Is it a cold, or is it COVID? My COVID test this evening says “Negative,” but my headache and scratchy throat have me saying “Ugh…” I’m going to bust through this newsletter real quick, and then take a hot shower.

How libraries in Jackson, Mississippi are supporting their community during the water crisis.

United we stand: suggestions for negotiating your first union contract.

Mercedes Lackey’s Valdemar literary universe will be getting a TV adaptation.

Sophia Coppola will be adapting Priscilla Beaulieu Presley’s memoir, Elvis and Me.

On the Come Up gets a limited theatrical release date.

Paper Girls has been canceled at Amazon after just one season, despite getting largely positive reviews.

The Pretty Little Liars reboot has been renewed at HBO Max for a second season.

Attica Locke offers a preview of the show she created with her sister Tembi Locke, based on Tembi’s best-selling memoir, From Scratch.

Comparing the book and TV adaptations of Carola Lovering’s Tell Me Lies.

Here’s a first look at Netflix’s upcoming film adaptation of The School For Good and Evil.

First trailer for The Storied Life of AJ Fikry and the new Percy Jackson series.

What happened to the golden age of big-screen YA book adaptations?

How to run for school board.

How librarians can counter lies from book banners.

How conservative Facebook groups are changing what books children read in school.

In 2022, there’s a new urgency behind Banned Books Week.

School Library Journal’s survey shows that censorship will have a long-term effect on school libraries.

Censorship wars: why have several communities voted to defund their public libraries?

How book bans turned a Texas town upside down.

Abilene (TX) City Manager removes the book Let’s Talk About It: The Teen’s Guide to Sex, Relationships, and Being a Human from the Abilene Public Library.

Huntsville (TX) residents are pushing back after the city orders the library to remove all displays until officials can respond to concerns and review existing policies. The outcry is related to a Read with Pride display that caused the library to temporarily close last week to remove displays.

The city of Austin voted unanimously to adopt the ALA’s Freedom to Read resolution and expressed support of the library’s material selection process and overall work to protect intellectual freedom.

After librarian Amanda Jones filed a defamation lawsuit against Citizens for a New Louisiana for their comments about librarians promoting and teaching pornography to children, CNL filed a counter lawsuit saying that their First Amendment Rights were being unfairly restricted. Yeah…that’s not how that works.

DeSantis leads a nationwide shift towards politicizing school board races in his push to censor school libraries.

John Green’s first novel may be banned at his old school in Orange County (FL). Said Green: “Please don’t ban my books in my hometown. It’s really upsetting for my mom.”

A committee formed by the Osceola County School District (FL) voted to keep four books in middle and high school libraries, but the books were pulled from school libraries last year. The school was set to make a final decision in a recent meeting, but the item was removed from the agenda.

Broward County (FL) elementary schools will start publishing a list of books held in school libraries, and some books that are deemed objectionable may be removed. This is an enormous amount of staff effort to go through, especially when so few parents have followed up on opting their students out of book access.

Blount County Schools (TN) hears book concerns from the community, including from a representative of a group of local religious leaders.

Virginia Beach’s obscenity suit revealed an outdated law and a society too reliant on government to raise children.

Spotsylvania (VA) will remove five books from high school libraries, including Red, White, and Royal Blue, Anatomy of a Boyfriend, Anatomy of a Single Girl, Red Hood, and Boy Toy.

SAD 6 in Maine are facing challenges to Gender Queer and It’s Perfectly Normal.

Rocky Point (NY) Board of Education faces backlash from their decision to no longer accept book donations from parents, saying that the Board is not an expert on book selection, and the decision should be left to the librarians. But this decision doesn’t make sense, since the librarians would presumably review the donated books before adding any to the collection, and this decision also suspiciously comes after a parent donated several LGBTQ books for Pride Month.

A letter to the editor from a New York parent who is upset that there are book options in the Young Adult section at their local library that aren’t suitable for a 13 year-old reader.

A website aimed at Central Bucks parents in Pennsylvania, called “Woke Pennsylvania” has a page designed to help parents make sure their children are opted-out from learning about critical race theory, LGBTQ+ topics, and more.

The Columbia County (OH) Rural Library Board of Trustees heard complaints against materials in the children’s department, including from a local pastor, who said “patrons are entrusting their kids to the library and use it in good faith.”

School libraries in Waukesha, Wisconsin have been maintaining a detailed library “book concern” spreadsheet in order to track challenges across the district. They have also had conversations with several lawmakers about “inappropriate” books being available in schools.

Maus is the latest pick for One Book, One Chicago, but it feels like a provocation.

Another news article centering a book banning group…this time it’s Protect Nebraska Children, which is responsible for many of the book challenges happening across the state.

What are some of the notable books that have been banned in Oklahoma schools?

A group of angry mothers in Oklahoma who are upset about the Norman High School teacher being disciplined for giving her students QR-code access to banned books have started making signs with giant QR codes to these same banned books.

Oklahoma school districts respond to PEN America’s list of banned books that indicate several books have been banned in state schools. Administrators say “We don’t ban books,” although their schools have opted to restrict, relocate, or remove multiple books in libraries.

Conservatives join liberals in a “quiet and polite” protest to save their Idaho library from book banners.

Another op-ed about “sexually explicit” titles being made available to middle schoolers in Nevada.

Battle lines have been drawn in the Santa Barbara (CA) school board wars.

A history of book bans – and their changing targets – in the US.

There’s no time to despair over book bans – just to fight them.

Oprah selects That Bird Has My Wings by Jarvis Jay Masters for her latest book club pick.

Art Spiegelman will be receiving an honorary National Book Award for Distinguished Contribution to American Letters.

The 2022 National Book Award for Young People’s Literature nominees have been announced.

The 2022 Anthony Award winners have been announced.

Tracie D. Hall, ALA executive director, will receive the 2022 Literarian Award for Outstanding Service to the American Literary Community from the National Book Foundation.

The Kirkus Prize finalists have been announced.

23 of the best true-crime TV shows.

In a secret Kabul book club, teen girls find comfort in the diary of Anne Frank.

The enduring allure of choose-your-own-adventure books. 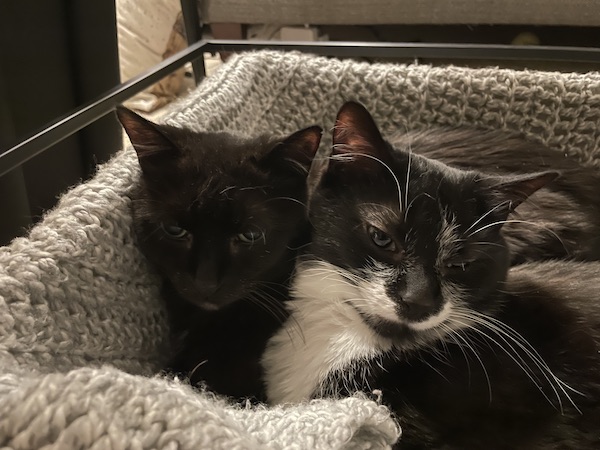 My snuggly buggly boys have taken to sharing the basket under our coffee table! Or rather, Dini gets in the basket first, and then while he’s asleep, Gilbert crams himself into the basket until he’s laying on top of Dini. But seeing them with their sleepy heads pressed together is just too much cuteness for me to handle!

Okay. Shower time as I try to sweat out whatever cold or allergen has taken root. Fingers crossed that I’m feeling better by tomorrow.