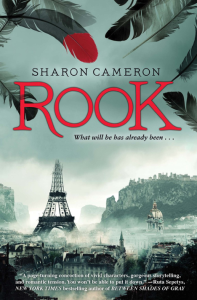 This week’s newsletter is sponsored by Rook.

History has a way of repeating itself. In the Sunken City that was once Paris, all who oppose the new revolution are being put to the blade. Except for those who disappear from their prison cells, a red-tipped rook feather left in their place. The mysterious Red Rook a savior of the innocent, and a criminal in the eyes of the government.

Meanwhile, across the sea in the Commonwealth, Sophia Bellamy’s arranged marriage to the wealthy René Hasard is the last chance to save her family from ruin. But when the search for the Red Rook comes straight to her doorstep, Sophia discovers that her fiancé is not all he seems. Which is only fair, because neither is she.

As the Red Rook grows bolder and the stakes grow ever higher, Sophia and René find themselves locked in a tantalizing game of cat and mouse.

As I’m sure you’re aware, we’re now 6 months deep into 2016. It’s not quite the halfway point yet, but it’s close enough that I feel comfortable pulling together a month-by-month of the biggest news in the YA world so far this year — as well as some of the things you may have missed that are worth a read. This won’t be comprehensive, of course, but it’s a means of catching up with some of the news you may want to remember, may want to forget, or may have missed the first time around.

At the end of each month, enjoy a special YA link to book lists or other great YAish stuff you should know about.

Do you know about Rich in Color? This Tumblr collects and shares weekly lists of diverse YA reads hitting shelves. It’s a tremendous resource.

Writer Nita Tyndall has a fantastic resource of LGBTQIA books in YA that aren’t about coming out. This is such a great list.

One thing I get asked all the time is how I keep track of new books. Obviously, I put together huge round-ups three months in advance, but that doesn’t mean I always remember what’s out or what’s coming soon. My secret is YA Lit. Click here. Marvel at their calendars. This is a killer resource.

Get familiar with the We’re The People resource for this year. It’s a list of recommended reads for youth — including YA titles and adult cross-over titles — that are written by and/or feature people of color and/or Native Americans.

I believe I’ve plugged the Sync Audiobook program in more than one newsletter but it is worth another shout out: legitimate free audiobooks all summer long, including popular YA books. You download and keep them. Forever. Really.

Roll up your sleeves and enjoy your well-stocked collection of link reading. We’ll be back in two weeks with a look at June news, as well as a discussion of (hopefully!) the breakdown of YA and diversity so far in 2016. Because, friends, it’s time to talk.