The 20 finalists for this year’s National Book Awards were announced early last week, five each in Fiction, Poetry, Non-Fiction, and Young People’s Literature. Based only on buzz, here are my predictions for the winners in each category:

Fiction: The Underground Railroad by Colson Whitehead
Non-fiction: Nothing Ever Dies by Viet Than Nguyen
Poetry: The Collected Poems by Rita Dove
Young People’s Literature: Ghost by Jason Reynolds

Next year, Arundhati Roy will publish her second novel, a full twenty years after her debut blockbuster The God of Small Things won the Booker Prize. Her new novel will be called The Ministry of Utmost Happiness and will come out sometime next year. Roy, though, has been extremely productive in the intervening decades since her last novel, writing a range of essays and non-fiction books.

Starting on October 5th, Amazon Prime members now have access to a rotating list of 1,000 ebooks and magazines as part of their membership. Some big-time magazines like Cosmopolitan and National Geographic are included, and among the books are a number of best-selling, if not recent, titles, including The Hobbit and the Harry Potter series. Each month, the selection will switch, though it’s not clear if it will be a complete turnover or if some of the included material will always be part of the deal.

This Week in Books is sponsored by The Lovely Reckless by Kami Garcia: 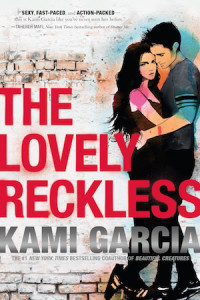 Frankie Devereux would do anything to forget the past. Haunted by the memory of her boyfriend’s death, she lives her life by one dangerous rule: nothing matters. At least, that’s what Frankie tells herself after a reckless mistake forces her to leave her privileged life in the Heights and transfer to public school in the Downs, where illegal street racing is more popular than football.

Marco Leone is the fastest street racer in the Downs. Tough, sexy, and hypnotic, he makes it impossible for Frankie to ignore him. But the risks Marco takes could have devastating consequences. Will Frankie risk what little she has left to follow her heart?