Get Cozy, Get Ready For Fall Reading

Some of us have been waiting to resurrect the Snuggie, put on a pot of hot chocolate, and make a nest of our fall reading piles. And, as it happens, you can set your autumnal clock by the book lists that arrive en masse before the first russet leaf falls from the tree. BuzzFeed has a particularly excellent list of upcoming books out this fall. So if your nesting plans are light on books, help yourself to Jesmyn Ward’s Sing, Unburied, Sing, Salman Rushdie’s The Golden House, Ayobami Adebayo’s Stay with Me, and so many more must-have fall reads.

St. Vincent To Adapt The Picture of Dorian Gray

St. Vincent (Annie Clark) will direct a female-led adaption of Oscar Wilde’s creepy novel about a hedonistic man, The Picture of Dorian Gray. A novel I halfway skimmed to get to the part where Gray gets his comeuppance because he made me so angry. Here’s the twist: in Clark’s adaptation, the title character will be a woman. St. Vincent is best known as a Grammy award-winning experimental rock multi-instrumentalist, but she does have experience as a filmmaker. It will be very interesting to see where she takes the story.

It’s really no surprise that putting a product in the hands of a big name leads to sales, and some books owe a great deal of their success to celebrity buzz. I mean, Oprah. And now, according to this New York Times piece, book publicists are all about foisting their product on celebs, specifically hoping it’ll pop up on their Instagram accounts. Bookish celeb Emma Watson is one of the examples they use–she has a following of 38 million. That’s a lot of potential book buyers.

“If the word ‘toxic’ was colloquially used in the 1960s, white people would’ve labelled the Civil Rights movement as such,” said Dhonielle Clayton, author of the upcoming The Belles. Clayton, alongside many YA authors, responded to Kat Rosenfield’s Vulture article about the “toxic nature” of the young adult community. The response, published on Bustle, was written by YA authors, Sona Charaipotra (Tiny Pretty Things) and Zoraida Córdova (Labyrinth Lost). There’s a lot to unpack here, specifically about the dangerous impact of critical conversations on race and representation being dismissed as “toxic drama,” and how Children’s literature is an overwhelmingly white industry that’s often unfair to marginalized authors. It’s worth a read, and the Vulture article is linked for context.

Thank you to In Other Lands by Sarah Rees Brennan for sponsoring this week’s newsletter. 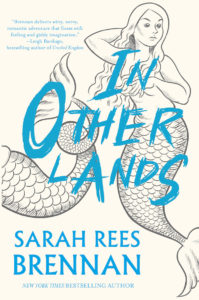 Elliot is smart, just a tiny bit obnoxious (he is thirteen years old), and perhaps not the best person to cross into the Borderlands where there are elves, harpies, and — best of all as far as he’s concerned — mermaids. In Other Lands is an exhilarating a novel about surviving four years in the most unusual of schools, about friendship, falling in love, diplomacy, and finding your own place in the world — even if it means giving up your phone.