Happy October, Insiders! This month, Jenn sat down with co-founder and COO Clinton Kabler, known around the offices as Clint, to talk about how Book Riot has grown and changed since its founding in 2011. But first! A couple notes:

We want to hear from you. Please head on over to our very quick survey about the Insiders program so far. On October 31 we’ll randomly select one (1) responder to win a $50 Powell’s gift card, so go forth and let us know how we’re doing!

Novel and Epic members: there’s a new treat in the Podcast feed, appearing monthly from now on. We hope you enjoy!

And, of course, we’ve got your Insiders-only deal. Accessorize in bookish style! 25% off scarves & socks with code GETINSIDEFALL. 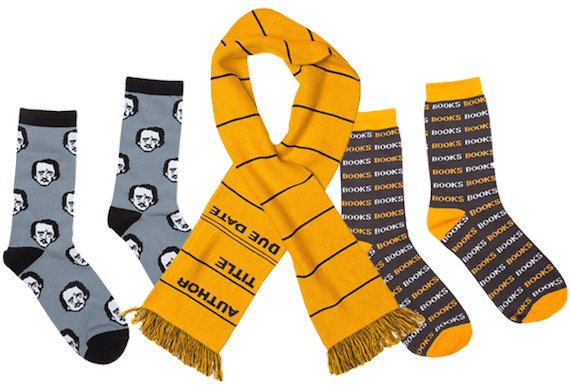 Jenn: Book Riot is now 6 years old! What’s your first thought when you hear that?

I also think about the way reading Book Riot has helped me read outside of my experience and comfort. I was not a mindful reader, and now I am. More importantly, I’m hopeful that the changes Book Riot brought to my own reading life have extended to Book Riot readers as well as the broader marketplace, contributing in a small way to the economic return that creators from traditionally marginalized groups receive from their books and comics.

Jenn: Unlike most of the staff, you’d never worked in books or a book-related job before founding Book Riot. How did that happen?

Clint: Jeff and I were friends from undergraduate at the University of Kansas, and we both moved to the New York City area to go to graduate school. In 2003, I moved to Vancouver, British Columbia. He gave me two books when I left. I still have them — East of Eden and The Things They Carried. (Confession: I’ve never brought myself to finish The Things They Carried. It’s too much.) After I moved to Vancouver, we stayed in touch because I travelled to New York City for work. Also, Jeff started sending out a list of about 10 books he felt were the best from the prior year. I read most of them, and he would get spatterings of my thoughts back. I still hold a grudge for his inclusion of 2666 on that list (which I finished). 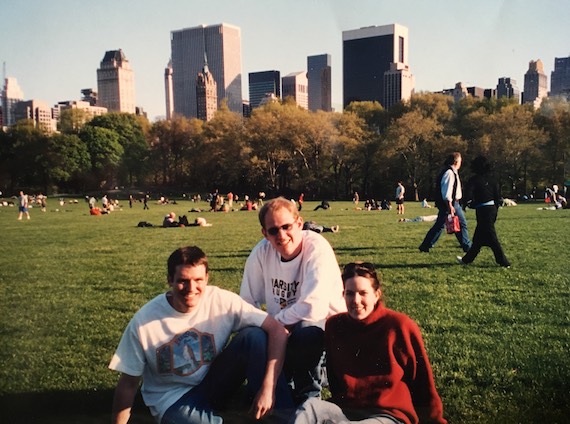 From left to right: Clint, Jeff, and Michelle (professional architect and Jeff’s partner)

By mid-2010, I had spent seven years at a software startup. My travel schedule was gruelling. My wife and I wanted to travel with our first child, so I started paternity that July. While in Guanajuato, Mexico, about a month into the three months we were traveling, I decided I didn’t want to return to my old job. I quit.

When we returned to Vancouver, my wife returned to work while I stayed at home with our daughter. I did some consulting but mostly just enjoyed being a stay-at-home dad. At this same time, Jeff had started a book blog. I was reading and enjoying it. I started reading some other blogs by people he followed like Greg Zimmerman (The New Dork Review of Books), Rachel Manwill (A Home Between Pages, now defunct), Wallace Yovetich (Unputdownables, now defunct), Kim Ukura (Sophisticated Dorkiness), and Amanda Nelson (Dead White Guys, now defunct). I remember waking up one morning with the idea that we could do “TechCrunch for books.” (Cue eye roll.) I talked with Jeff about it. He agreed. I was unemployed. He was underemployed. So, we thought it would be a ~~~great idea to pool money from savings~~~ and start a thing. That was June 2011. We put the infrastructure in place and launched Book Riot on October 3 of the same year. The goal: create an influential place where books and reading could be talked about in the interesting ways book bloggers were talking about books and reading. Jeff and I didn’t get paid anything for the first 18 months… and here we are today. As I was writing this, I went back and opened our first business plan. After two minutes, I closed it because I couldn’t handle past me’s naivety.

Jenn: Tell us one of your favorite stories from the founding days of Book Riot, back when it was just you and Jeff.

Clint: Well first, it was never just Jeff and me. We both had working women who provided for our families so that Book Riot was possible.

Jeff and I were trying to come up with a name for the thing. We had a spreadsheet of the possibilities, and he was convinced it was Book Riot. I wasn’t convinced. He called me the evening of June 15 to try to convince me. I stepped out onto our balcony to argue about the name. There was black smoke over Vancouver. My wife stuck her head out the door and said something about the Canucks losing Game 7 and riots had started (clearly I care about hockey). I don’t know if I took that as a sign, but I capitulated quickly so I could turn on the local news.

Jenn: What has been the most surprising change from Book Riot’s founding to today?

Clint: I don’t know if it is surprising, but it is noticeable. Rebecca and I were in New York City at the end of September and we stayed in a hotel. In our own rooms!

The first year when I travelled to New York to meet with potential advertisers my friends Kahlief and Jill let me sleep on their couch in Brooklyn. A year or so later, we graduated to the cheapest Airbnbs where you’d have to walk through a colleague’s room to get to your sleeping closet. We’ve had various other non-private, perilous arrangements that lacked air-conditioning. Walking into a private room a few weeks ago after a full day of meetings in NYC and immediately depantsing, because I could, was a luxury.

Clint: I’m going to pick three. A favorite I enjoyed for the writing: Yaa Gyasi’s Homegoing. A favorite for the pure enjoyment of the story: Kevin Kwan’s Crazy Rich Asians trilogy. A favorite because it is a respite from the chaos of the world: Common Prayer: A Liturgy for Ordinary Radicals by Shane Claiborne, Jonathan Wilson-Hartgrove, and Enuma Okoro. Since Jeff doesn’t recommend books much anymore, Book Riot contributor Derek Attig is my go-to for book recommendations.