This edition of Today in Books is sponsored by Alfred A. Knopf, publisher of Madness is Better than Defeat by Ned Beauman, available now wherever books are sold. 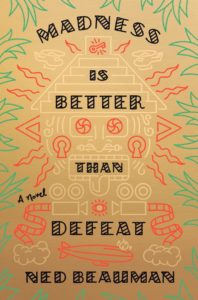 The Brontë Society will publish two unpublished manuscripts by Charlotte Brontë, found in a book belonging to her mother and sold to the society in 2015. The manuscripts will be published in a book, along with annotations, a sketch by Charlotte Brontë’s brother, and contributions from four Brontë specialists who will “reveal important new information” relating to her mother.

The Booksellers Guild of Madrid highlighted 80,000 words in Don Quixote to give readers online access to the text of a recently banned book about drug smuggling. The book is Nacho Carretero’s Fariña. The former mayor of O Grove in Galicia halted sales of the book and brought legal action against the author and his publisher over details in the book about his alleged involvement in drug shipping.

The Public Library Association and community publisher Short Edition will introduce a Short Story Dispenser, allowing readers to print one-, three-, or five-minute stories, to four libraries. The partnership and project is being launched with the intention of promoting reading and literary joy through public libraries, and to encourage diverse writers to share their work through Short Edition’s digital content platform.