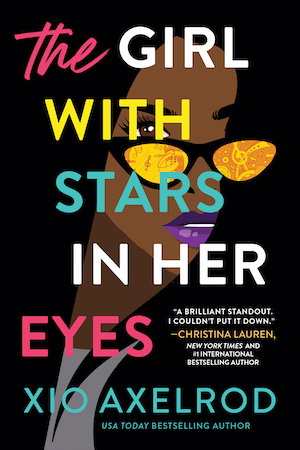 Growing up, Toni Bennette’s guitar was her only companion…until she met Sebastian Quick. Seb was a little older, a lot wiser, and promised they’d escape their stifling small town together. Then Seb turned eighteen and split without looking back. All grown up, Toni tries out for a hot new up-and-coming band. Strong, feminist, and fierce as fire, Toni B. and the Lillys are the perfect match…except Seb’s now moonlighting as their manager. No problem. Or it wouldn’t be if Seb didn’t still hold a piece of Toni’s heart…not to mention the key to her future.

Hello again romance readers. I’m PN Hinton, your companion for the world of romance. If you’re new to the newsletter, welcome and enjoy your stay. If you’re a long-time reader, welcome back; it’s good to see you again.

Present me is writing this hoping that future me is coming off a relaxing weekend. The previous two, I’ve been out and about doing more moving around than I have in a long while. I just want a few days to chill and maybe visit a few people. I may go to an (outside) wine bar on Sunday, but, as of right now, even that is still up in the air. Only time will tell what the weekend brought.

But here’s hoping. I’ll be sure to update you next time.

Also, there are officially 14 more days of school. I’m. So. Happy. If I didn’t have to clean it up I would throw a confetti parade come the last day of school. We’re almost there y’all.

Trish and Jess talked a bit in last week’s episode about romance covers. This always seems to be a hot topic of debate in Romancelandia. Recently, it has been the illustrated cover versus the real people cover versus (to me) the unholy combination of the two. Now, we seem to be cycling back to the clinch covers that were prevalent in the early days of romance. This is almost a complete 180 from the trend of the more “tame” covers featuring barns or other country buildings that have recently been prominent in romance.

Personally, I’m down with this, especially for situations where I’m picking out a new book to read. Publishing has been a bit lazy in that anything with a thread of romance in it is classified as romance, even when it’s really fiction. So, it can be tricky sometimes to determine if a book you’re reading is an actual romance or fiction with a romantic element. The partially uncovered décolletage on clinch covers helped to give rise to the phrase “bodice ripper.” So, there is no feigning ignorance about what genre books with those covers are.

Emily Henry’s Beach Read is a perfect example of that for me. I loved this book and it came into my life at the right time. But it’s not romance, it’s fiction with a romantic element. I am not sure if her latest, People We Meet on Vacation, is the same as I have yet to read it. But, both covers have two people on the beach in a relaxed vacation setting. We really don’t know from the covers alone what type of story we’re in for, because they’re ambiguous.

And all these covers with the beach chairs, barns, and dogs on docks are exactly that; ambiguous. It’s like “Am I reading about a multi-generational story of estranged family members coming together after the matriarch passes? Or is it a woman embracing a simpler life in the country over the big city after being betrayed by her boyfriend and losing her job all in the span of ten minutes? Is someone going to pin someone else up against the wall of that barn and make the hay fall out of the loft? What’s going to happen? I’m so confused!!”

The preference for a specific cover type comes down to a concern about perception. What type of readers are we attracting with this specific cover? Are others who may be interested in the book shy about purchasing one with a “scandalous” cover? Would they buy it if it was otherwise? And what type of reader do people think you are when they see you reading those books with the former type?

Possible cover embarrassment may have been a concern when I was younger and had more flips to give. Now…not so much. That said, I’ll admit that when I typically read in public, it is usually on my e-reader or headphones. So, all the covers are hidden. Ignoring that fact though, and pretending to be in a parallel timeline where I don’t have one, I wouldn’t mind being in public, reading a book with an old school romance novel cover. I’m not saying I would go to the church picnic with it; but I would sit on a plane with it proudly because I likes what I likes.

Berkley announced that it is teaming up with Stacey Abrams to reissue the first three novels she penned as Selena Montgomery. While most of us in Romancelandia already knew Stacey as a talented writer, this is a wonderful opportunity for new readers in the genre as well as established ones who want to revisit the books.

Enter here for a chance to win a free iPad Mini!

Here are some of the anticipated romantic reads headed our way this month. Surprising absolutely no one, quite a few of these are already on my TBR.

Here are some of the new releases hitting the shelves this week:

Back in the Day by Katrina Jackson

Talia Hibbert’s reissue of The Roommate Risk (previously Wanna Bet?) is $0.99 until the 12th. I listened to this as an audio book a few years ago and loved it. The steam factor here had me almost drive off the side of the road multiple times. You can also pick up Alyssa’s Cole An Extraordinary Union and The Prince’s Bride by J.J. McAvoy for the same price. The Wolf at the Door by Charlie Adhara and Tracy Anne Warren’s Happily Bedded Bliss can be snagged for $1.99.

That’s all she wrote for today. Give me a follow as @PScribe801 over on Twitter if you want more of my bookish ponderings. Until next time.