Surprising exactly none of you who have been reading this newsletter over the last year or so, my favorite horror franchise, hands down and of all time, is Alien. And when I love a franchise, I LOVE franchise. Even the bits of it that maybe don’t work as well as the rest (looking at you, Resurrection). But without a doubt, my favorite part of the Alien franchise, after the films themselves, has to be the novel series. What started as novelizations of the early films by Alan Dean Foster, and grew into a two part series of novels (first from 1992-1998 and then from 2005-2008), has seen a new boom of titles in recent years. A third series of novels, starting in 2014 and really gathering momentum in the last two years, has begun to shape the franchise’s main storylines in new and thrilling ways.

I have my theories about why we’re seeing this new uptick in Alien novels, but then again, I have a lot of theories about the Alien franchise, period! However, this week’s newsletter isn’t about my tinfoil hat Alien conspiracy theories (maybe next time), because tomorrow, April 26th (4/26), is Alien Day! And I can think of no better way to celebrate than by highlighting the three exciting new Alien novels set to be released this year. 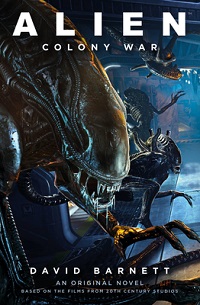 Originally published on April 19th in the U.K., this newest installment of the Alien novel series will be out tomorrow in the U.S. just in time for Alien Day! I am particularly excited for this book since it’s a (mostly) direct sequel to Alex White’s Alien: Into Charybdis, which I absolutely adore. Cher Hunt is determined to find the person responsible for the death of her sister Shy, a casualty of the deadly incident at the Hasanova Data Solutions Colony. Together with Chad McLaren, whose mission— like that of his wife Amanda Ripley— is to prevent further weaponization of the Xenomorphs and a synthetic called Davis, Cher travels to a drilling facility on LV-187. The drilling facility has been destroyed and all its personnel slaughtered. With the blame laid on British military forces, and the Colonial Marines inbound, tensions between Earth’s political factions are strained to a breaking point; only their crumbling alliances keep the whole interplanetary colonial system from devolving into a full out war. And things only get worse when the British and Colonial forces on LV-187 suddenly find themselves overrun by xenomorphs. 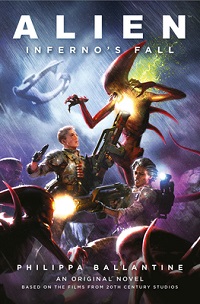 Co-written by Ballantine and Carija, the second Alien novel we can expect this year, Alien: Inferno’s Fall, will plunge us back into the fallout from the colony war. Set on a mining planet colonized by the Union of Progressive Peoples (the UPP), Shānmén, Inferno’s Fall is about the sudden and devastating arrival of an all too familiar horseshoe-shaped vessel that appears over the mining colony one day and unleashes an (equally all too familiar) black rain on to the planet’s surface. What follows is a series of violent and catastrophic transformations that threaten to wipe the colony out completely. Trapped on such a distant planet, and with the various military forces tied up trying to shoot each other out of space, the colonists’ only hope for rescue lies with the crew of the Righteous Fury: the Jackals. A mix of ex-Colonial and Royal marines, the Jackals are led by recurring Alien franchise character (and love of my life) Zula Hendricks, and their mission— much like McLaren and Ripley in Colony War— is to put an end to the weaponization of the xenomorphs. And, in the case of Shānmén, to rescue what few survivors they can from a planet being consumed by an ancient mutative force. 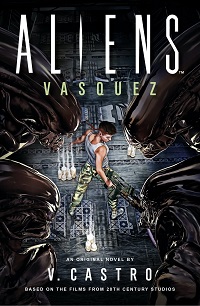 And last, but oh most CERTAINLY not least, closing out this years run of shiny new Alien novels is the much anticipated Aliens: Vasquez, by V. Castro. Already a known star of the horror genre, V. Castro will be scaring readers anew as she recounts both the long awaited backstory of fan favorite Jenette Vasquez, and the future of Vasquez’s children, who will follow in her footsteps for better or worse. Vasquez’s life has never been easy. Even before the marines, and before that fateful mission to Hadley’s Hope, her life was a constant struggle for survival. When the Colonial Marines offer her an out after life in a street gang lands her in prison, Vasquez decides to take her chances in space, even though it means giving up her children and letting them be raised by her sister.

Fast forward years after the tragic incident on LV-426 and Vasquez’s twins are all grown up, but their lives have taken very different turns: Leticia has joined the Colonial Marines, like her mother and so much of her family before her, while Ramon has launched himself into the ranks of Weyland-Yutani. The two are separated by distance and circumstance, until an unnamed planet with untapped potential puts Leticia and Ramon on a collision course not only with each other, but also with a deadly Xenomorph outbreak.

Lauren P. Dodge was a guest on Books in the Freezer’s most recent episode, talking about Southern Gothic horror.

Goodreads is holding a giveaway for 50 ARCs of Reluctant Immortals by Gwendolyn Kiste, and it ends TODAY (4/25)! So don’t forget to go enter before the clock winds down!