Today’s pick is the most phenomenal memoir by a comedian I have read by far! 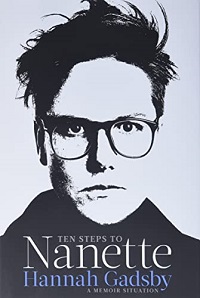 Ten Steps to Nanette: A Memoir Situation by Hannah Gadsby

I’m going to lead with the content warnings and there are many: sexual assault, homophobia including violent attacks, ableism, sexual molestation, more homophobia, racism, misogyny, assault, injury, isolation, suicidal ideation, fatphobia, and surely there may be some I am missing.

This book is very much like her show Nanette. While it is a memoir and the tale of how she became who she is and how Nanette came to be, the book in itself has a very similar feel. That is to say, while reading this book I could be doubled-over, absolutely choking with laughter one minute and two sentences later feel like I’ve been punched in the face. This happens repeatedly. Uncontrollable giggles then it’s like the wind was completely knocked out of me and I need to sit because I found I was suddenly trembling. Gadsby is phenomenal at what she does on stage and it has translated well to this book, which I cannot say for most other comedian memoirs that I’ve read.

Much of the book is about Gadsby’s childhood growing up in Tasmania as the youngest of five children. She intermittently provides a history lesson on homophobia in Tasmania and Australia as a whole which colored how she thought of queer folks and ultimately, herself. She also talks about being diagnosed with autism as an adult and is able to look back on her childhood through that lens, clicking together pieces of the puzzle of her life.

Gadsby also talks about how she got into stand-up comedy and her experiences in comedy leading up to Nanette. I am fascinated by her breakdown of how Nanette came to be, how it was pieced together and grew and changed and what her intention was with it and finally, why she stopped performing it.

I cannot get over how good this book is and it is certainly one of the best books I’ve read this year.