Welcome to Check Your Shelf. Any suggestions for combatting COVID brain fog? I had to leave work early on my first day back in the building because I could barely string two sentences together in an email after the first few hours. I know there isn’t much to do other than rest, but I don’t care much for this part of the recovery.

However, today is also the day I discovered Trombone Champ, which kinda sounds like the inside of my head at the moment.

Republican residents are angry about being barred from an event held at the Grayslake Public Library (IL).

The library sitcom Shelved could be the laugh we all need right now.

Steven Rowley’s The Guncle will be adapted for film.

Karen Kingsbury creates her own production company to adapt her novels for TV and film.

A first look at the adaptation of American Born Chinese.

Trailer for the remake of Let the Right One In.

In the first 8 months of 2022, ALA has received 681 documented reports to ban or restrict library resources. For comparison, ALA tracked 729 reports in 2021, which was about double the number of reports from 2019.

The overwhelming majority of American voters strongly oppose book banning, according to a national poll.

Texas has banned more books than any other state.

The Victoria Public Library (TX) Advisory Board adopted a new policy that will allow them to review whether books should be added or removed to the collection based on community input.

A Katy ISD (TX) parent reports that her daughter’s junior high English teacher removed every YA book in her classroom library to avoid controversy, even though the district says that their teachers were under no official orders to do so.

Orange County (FL) school board candidate complains about “sexually explicit” books being made available in schools. Not surprisingly, this board candidate is a member of Moms for Liberty.

A Polk County (FL) member of Citizens Defending Freedom petitions the school board to change its “opt out” policy to an “opt in” policy, where parents would need to “opt in” to having their children have access to particular books.

Four books were challenged and reviewed in Osceola Public Schools (FL), even though there were no formal complaints made. Stop making book banners’ jobs easier!

In Forsyth County (GA), parents can get notification of the books that their children check out of school libraries.

Fauquier County (VA) School Board plans to revise their policies around books containing “sexually explicit content,” possibly in response to pressure from Moms for Liberty.

Banned books have become a focal point for the governor race in Maine.

Meanwhile, Gender Queer and White Fragility are being challenged at Spruce Mountain High School (ME).

A federal judge denied a request from a Great Valley School District (PA) parent to issue an injunction to remove sexually-explicit books from the school libraries.

Pennsylvania state legislators have introduced legislation that would allow officials to remove material deemed “highly sexual” from school libraries, although of course there’s no indication of who gets to make that decision and what metric would be used.

A parent in Amity, Connecticut brought a list of over 80 books to a recent school board meeting, calling for their removal.

“Anita Hill would have to agree with me:” Let’s Talk About It has been removed from the Oak Brook Public Library (IL).

Gender Queer and Patience and Esther are back on the shelves at Dixon Public Library, although the same library is drafting new display policies after community members continue to complain about LGBTQ books that were put on display.

The St. Joseph School Board (IN) clarifies its book review policy after a parent thanks the school for removing a book that she had previously claimed was pornographic. Except…the school hadn’t removed the book.

The East Central Regional Library (MN) elects to keep It’s Perfectly Normal on shelves, and declines to move it from the children’s section to the adult section.

Seven books have been pulled from the Dearborn School District (MI) after a parent filed a police report, and eBook access has also been limited.

The Perry School District (IA) is reviewing an unnamed book that has been used for years in high school English classes after a parent complained.

Kearney (NE) Public Schools heard complaints at a school board meeting about the presence of LGBTQ books in school libraries.

Conway Public Schools (AR) have to contend with a newly elected board member, who very openly campaigned in support of book banning and censorship.

The National Coalition Against Censorship calls on the Norman, Oklahoma school district to clarify the new state law, which limits discussion of critical race theory in the curriculum. Some parents believe that the teacher who provided QR code access to the Brooklyn Public Library’s banned books collection should be held accountable for breaking the law.

The Wellington (CO) library board has voted to ban book bans.

Greeley-Evans School District 6 Board of Education (CO) is evaluating whether or not it will continue to allow public participation at their board meetings. The Salem-Keizer School Board (OR) instituted a similar policy recently, for similar reasons.

How an Idaho high school student won a school board seat by standing up to extremists.

The Mead School Board (WA) struck down proposals that would have banned critical race theory and gender studies.

Today’s book bans might be more dangerous than those from the past.

Anti-drag harassment continues across the country.

What parents can do when schools ban books.

Colleen Hoover has topped 7 million units in print sales in 2022.

Here are all the longlists for the 2022 National Book Awards.

The winners of the 2022 Ignyte Awards have been announced.

I hesitate to call this “pop culture,” but I’m not sure what other section to put this under: A judge has vacated Adnan Syed’s murder conviction, which was the focus of the immensely popular podcast, Serial.

Idris Elba says that the Luther film has finished filming.

How to create a school library podcast.

How to find the author behind the pseudonym.

The best book cataloging apps for managing your overflowing TBR.

Why this reader isn’t impressed with how many books you’ve read. 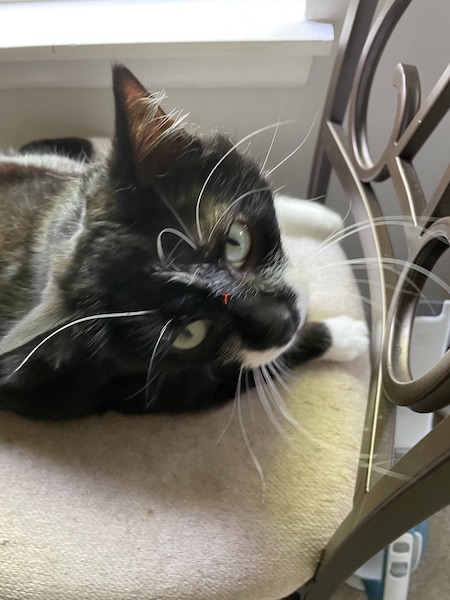 Dini took a pause from his busy schedule to show off his magnificent whiskers. The photo is a little blurry, but that’s just because I couldn’t get him to hold still for longer than .6 seconds.

Time to try and sleep off some of this brain fog. Hoping to fare better next weekend.