How are you? I hope you’re doing well. As for me, I’m absolutely devastated because I recently learned that my favorite restaurant in the whole world will be shutting its doors for good on October 7th. The Grit is so full of memories for me. It’s where my friends and I got together for weekend brunches. It’s where I went for dinner on prom night. It was my vegetarian safe haven. If you want to give The Grit a try, you have until 10/7 to get to Athens, GA and grab one last Golden Bowl. Or if you can’t make it to Georgia any time soon, make sure to grab a copy of the Grit cookbook so you can make your own Grit food at home. It’s so good and totally worth it.

Anyway, the show must go on! Let’s chat books.

Here’s the cover reveal for Ride or Die, Gail-Agnes Musikavanhu’s debut YA thriller, out from Soho Teen on June 6th, 2023.

Iron Widow, the New York Times bestselling novel by Xiran Jay Zhao, is going to be a movie!

The Nerd Daily has the exclusive cover reveal of Jordan H. Bartlett’s Queen’s Catacombs, the second installment in The Frean Chronicles. This book is out on March 14th, 2023.

Here’s the cover reveal for The Future King, Robyn Schneider’s sequel to 2021’s YA humor/fantasy novel The Other Merlin.

Disney+ has optioned a series based on Melissa de la Cruz’s YA novel The Ring & The Crown, published by Disney Publishing Worldwide.

Brian Selznick, author of The Invention of Hugo Cabret and Wonderstruck, has a new novel coming out: Big Tree, inspired by an idea from director Stephen Spielberg.

TikTok has partnered with Penguin Random House to create a new in-app feature that allows users to link directly to PRH titles in their video captions.

Here’s the trailer for Rosaline, a comedy based on Shakespeare’s Romeo and Juliet.

Netflix has announced that season 2 of Heartstopper is officially in production!

The City of Chicago and the Chicago Public Library have declared themselves book sanctuaries, offering a safe space for endangered stories. 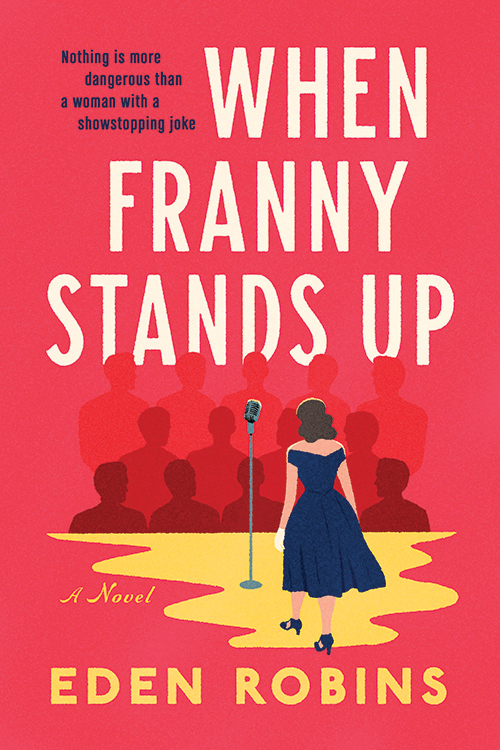 When Franny Stands Up by Eden Robins (Sourcebooks Landmark, November 1)

When Franny Stands Up doesn’t come out until November 1st, and here we are at the end of September. So while right now November seems a million days away, it’ll be here sooner than you know it. So prepare yourselves for this one, because this novel is the perfect funny and heartbreaking read to pick up for the fall.

Set in Chicago during WWII, When Franny Stands Up tells the story of Franny Steinberg, who is first introduced to the concept of the “Showstopper” one Christmas Eve when she sees the comedian Boopie Baxter perform at the Empire Room of the Palmer Hotel. From that moment forth, Franny’s dream is to become like her idol Boopie. At the Blue Moon Comedy Club, Franny learns the true power of the Showstopper, that moment when the audience laughs so hard that they are transformed. When Franny finds herself onstage in a torn bridesmaid dress, she realizes her Showstopper has the power to change everything. Not just for the audience, but for herself also.

When Franny Stands Up is funny, sweet, and certainly magical, but it also covers difficult topics— such as PTSD and sexual identity— with insight and heart. This book confronts the difficulties of life, but it also celebrates laughter and its power to heal and bring people together.

The School for Good Mothers by Jessamine Chan

Not all of these are literature-based, but how could I let this Monday pass and not bring up all the Adam Levine DM memes? The Internet is a wonderful place. I don’t care what anyone says.

Checking in with Remy in the cat tree. He’s still loving it. We call this his side car, and it’s perfect because he’s got this dangly toy right in front of him. Whoever invented cat trees was really onto something.

Anyway, that’s it for Monday’s Book Radar! I hope you have a wonderful week. Don’t forget to go eat a golden bowl for me if you’re in Athens.