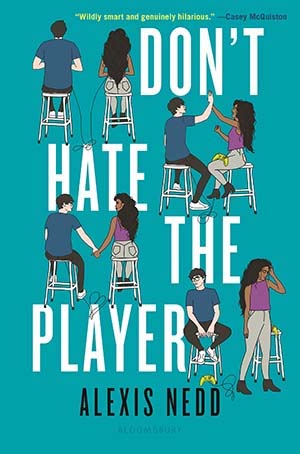 When a major eSports tournament comes to her city, Emilia is determined to prove herself to her team and the male-dominated gaming community. But her perfectly balanced life is thrown for a loop when a member of a rival team recognizes her. Debut author Alexis Nedd has crafted a YA combo-punch of charming romance and virtual adventure that will win the hearts of gamers and non-gamers alike.

Happy Thursday, readers. It’s time for me to rock your reading worlds with more bookish excitement! I love writing these newsletters. Every day, I flag posts and take screenshots of things that I want to share with you when I write the next one. My husband has become used to me pausing a show we are watching two or three times because I suddenly remembered a book I wanted to look up or a bit of news I want to mark down. My life is books and cats, 24/7. I’m a real-life Edward Gorey cartoon!

Moving on to today’s newsletter: I have exciting book news for you about adaptations, book covers, and an upcoming fairytale from T. Kingfisher that I am excited to read. Plus I’ve included a picture of my boneless orange tabby, some trivia, and more! I love writing these newsletters and I appreciate your support so much. Whatever you are doing or watching or reading this week, I hope you good bob and we same place again very now. I’ll see you again on Monday. – xoxo, Liberty, Your Friendly Neighborhood Velocireader™

Trivia question time! In The Underground Railroad by Colson Whitehead, what did Cora inherit from her mother, who had inherited it from Cora’s grandmother? (Scroll to the bottom for the answer.)

Tokyo Ever After by Emiko Jean is Reese Witherspoon’s new YA book club pick.

We’ve got a giveaway for a chance to win an iPad Mini! Enter here.

Here’s the first look at Jami Attenberg’s first nonfiction book I Came All This Way to Meet You: Writing Myself Home.

Here’s the cover reveal of Goliath, the first full-length novel for adults by Tochi Onyebuchi.

Whitley Strieber’s The Hunger, which was made into an amazing 1983 movie with David Bowie and Catherine Deneuve, is getting a remake.

Here’s what we know about Flight, the upcoming novel from Want author Lynn Steger Strong.

Here’s the trailer for the Fear Street trilogy, based on the book series written by R.L. Stine.

Nathalie Emmanuel and Garrett Hedlund will star in the lead roles in The Bride, inspired by Bram Stoker’s Dracula.

Lee Mandelo’s new novella, set in the world of wolves, was announced.

Here’s the first look at Rosebud by Paul Cornell.

Here’s the cover reveal of Until the Last of Me: A Take Them to the Stars Novel by Sylvain Neuvel.

Here’s the first look at Such a Pretty Smile by Kristi DeMeester.

Here’s the first trailer for The Lost Symbol on Peacock.

Tordotcom announced The Archive Undying, a queer novel about giant robots by Emma Mieko Candon. They also acquired the novella The Two Doctors Górski by Isaac Fellman, about magic and grad school.

At Book Riot, I work on the New Books! email, the All the Books! podcast about new releases, and the Book Riot Insiders New Release Index. I am very fortunate to get to read a lot of upcoming titles, and learn about a lot of upcoming titles, and I’m delighted to share a couple with you each week so you can add them to your TBR! (It will now be books I loved on Mondays and books I’m excited to read on Thursdays. YAY, BOOKS!) 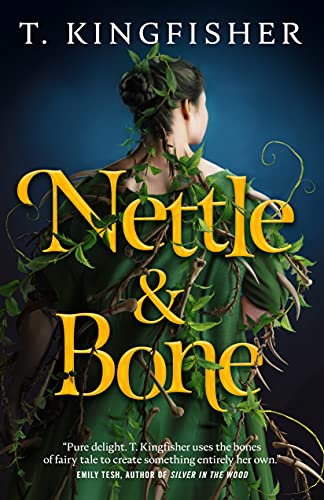 Are you ready for more fairytales? I sure am! This one is about Marra, a “shy, convent-raised, third-born daughter” who decides that after watching her older sisters be abused for years by an evil prince, she will be the one to save them. And by save them, I mean she’s going to kill the prince. In order to complete her mission, she must first complete three impossible tasks. If Marra can do that, she will free her family and her country from a tyrant. I am so excited about all of that but I would be lying if I didn’t mention I am even more excited by Marra’s ragtag crew who help her on her mission: a gravewitch, a reluctant fairy godmother, a strapping former knight, and a chicken possessed by a demon. Let me just say that again: a chicken possessed by a demon. *faints*

Yes, this one is really far away, but it doesn’t mean you can’t mark it down on your TBR now! I have lovedlovedloved Kingfisher’s last two adult novels, The Twisted Ones and The Hollow Places, which managed to be both hilarious and absolutely terrifying, and I also loved her recent fantasy novel, A Wizard’s Guide to Defensive Baking, which is up for several awards this year!

And if you didn’t know, T. Kingfisher is the pen name of Ursula Vernon, who is the genius behind the adorable Dragonbreath series and more! My point is that you have a ton of Kingfisher/Vernon backlist to visit while you wait for this book, which is sure to be as spectacular as everything else she has done!

What I’m reading this week.

The Girl Who Fell Beneath the Sea by Axie Oh

Sex Cult Nun: Breaking Away from the Children of God, a Wild, Radical Religious Cult by Faith Jones

We Are Watching Eliza Bright by A.E. Osworth

Song stuck in my head:

The Bends by Radiohead. I didn’t expect to wake up with this song in my head for no discernible reason, but here we are. (Also, I’m still really into listening to songs I loved when I was young. You can listen to a lot of them in this playlist I made!)

And this is funny:

A two-for-one of double Shakespeare-related laughs here and here.

And here’s a cat picture!

I don’t even know what is happening here. My best guess is that all of Zevon’s bones have melted.

You made it to the bottom! High five. Thanks for reading! – xo, L