Today’s pick is historical fiction about an actual person that I think book-lovers should know about. I am ashamed, as a person who is Black and a librarian, that I had never heard of this woman and I am desperate to know more. 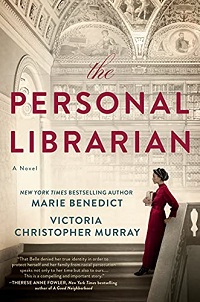 The Personal Librarian by Marie Benedict and Victoria Christopher Murray

Belle Marion Greener was a Black woman and J. P. Morgan’s personal librarian. Belle was very light-skinned and passed as white. She went by Belle da Costa Greene, saying the da Costa was from a Portuguese grandmother of hers, which is why she was slightly olive-skinned.

Belle’s mother and siblings were also very light-skinned. Her father was too, but he was a prominent Black man, Harvard University’s first Black student and Black graduate, and an attorney who was dean of the Howard University School of Law. He fought loudly and openly for equal rights for Black people. He’s also the one who gave Belle an appreciation for books and fine art. Belle’s mother, Genevieve, had different ideas. She decided that she and the children would pass as white to gain access to things they could not if they stayed being perceived as Black. They moved up to New York (they were from Washington, D.C.) and Belle’s parents, having very different views on what was best for them and the children, separated from each other.

Belle got a job as a librarian at Princeton University, where she met and intellectually dazzled the nephew of J. P. Morgan. J. P. Morgan already had an extensive rare books collection and had a library built to house the collection he had in hand as well as to supply a place for the collection to grow. His nephew insisted he interview Belle to be the librarian.

Needless to say, she got the job and was thrust into the world of fine art auctions and rare book dealers, which was at the time, for the most part, the realm of men. Not only was she so incredibly careful with every single thing she did so that people would not find out her true heritage, but she was also trying to make a name for herself in a world where the expectations and respect for women were so incredibly low.

The book is full of extravagance and secrets. There’s definitely some anti-Semitism and racism, so be aware of that. I really loved this book. Belle is an absolute force to be reckoned with. There’s a great historical note at the end where the authors talk about where some of the largest liberties were taken and I appreciate that.