Happy Monday! I hope you had a great weekend and that you’re excited for some book talk, because do I have some book things for you to feast your eyeballs upon. Let’s not wait any longer. Let’s just hop right into the things. I can’t wait to share.

Holy moly, y’all. I gotta start with the bit of news I’m the most excited about because…is this my most anticipated movie of the year? I think it is. And guess what? Amazon has just release the trailer for My Best Friend’s Exorcism, and it yeah. It friggin’ slaps. In case you have somehow missed out thus far, this movie is based on the book by Grady Hendrix, and it’s so good. So, like, if you haven’t read it yet, go do that before the movie comes out. Go, go, go! The movie’s out September 30th.

Phew. Okay. Now with that out of of my system, let’s talk other book things.

We love the sound of a college-based second chance romance! Check out the cover reveal of The Do Over by Suzanne Park. This looks so cute.

How about a Party of Five remix? Here’s the cover reveal of As Long As We’re Together by Brianna Peppins. Out from Scholastic on April 4, 2023.

Locus Magazine revealed the cover of Olivia Chadha’s Fall of the Iron Gods. This sequel to Rise of the Red Hand is described as a “searing portrayal of the future of climate change in South Asia.”

And check out the cover of Frederick Joseph and Nicholas Smith’s Black Panther: Wakanda Forever – The Courage to Dream, a children’s book tie-in to the new Black Panther film.

Poet and author Teresa La Dart is suing Taylor Swift. La Dart claims that Swift stole the design of her 2010 book Lover for the book accompanying Swift’s 2019 album of the same name.

Stephen Graham Jones has announced that his upcoming comic Earthdivers is set to become a TV series through 20th Television, which is part of Disney.

Netflix has greenlit Parasyte: The Grey, a new Korean original horror series from Yeon Sang-ho, the director of Train to Busan and creator of Hellbound. The upcoming series is a reimagining of Kodansha’s manga series Parasyte, written and illustrated by Hitoshi Iwaaki.

Hey you! Are you up for BookyCon 2022, the world’s largest virtual book festival? Reserve your ticket here!

Calling all Stephen King fans! For the third year in a row, USDish.com is looking for a fan who wants to watch 13 movies based on Stephen King novels. In exchange, the fan will receive $1,300, a swag bag with a $350 value — which includes a FitBit — and tickets for the 2023 premier of Salem’s Lot. Check out all the details here. 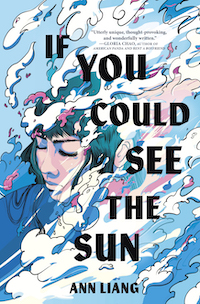 If You Could See the Sun by Ann Liang (Inkyard Press, October 11)

I love a YA book with just a little pinch of magic, and hey, this book comes out just two days before my birthday, so I’m considering this one a gift from Inkyard Press to mark my special day. In other words, this book is so good it deserves to be my birthday book. Those of you who are big birthday people know what a big deal that is.

Anyway, you’re here to find out about the book, not my birthday (although, FYI, I do love surprise parties).

If You Could See the Sun is Ann Liang’s YA debut. It’s the story of Alice Sun, a teen girl who has always felt invisible compared to the rich kids at her elite Beijing international boarding school. Then one day…she actually becomes invisible. And she has no control over when it happens.

At first, the whole turning invisible thing feels like it’s going to be a huge problem. But when Alice’s parents tell her they will no longer be able to afford the school’s tuition (even with her scholarship), Alice sees an opportunity and seizes it. You see, being invisible has quite a few perks, and Alice has found a way to monetize it. Now, she’s finding out all the secrets her classmates want to know (for a price). But what happens when the secrets escalate too far? And what risks will Alice be willing to take?

Flowers from the Storm by Laura Kinsale

As someone who loves to read sad books and who cries about everything and is often sad and “doesn’t know why,” I took this meme personally.

Welcome back to the window with everyone’s favorite orange kitty, Murray. I know he looks like he’s about to sneeze, but that’s just him being cute. Fun fact: right after this picture, he saw a squirrel outside of the window and was totally excited. Good for him living his best life.

And…that’s it for Book Radar for this lovely Monday! I hope you have a wonderful week, and I look forward to chatting with you again on Thursday, friends.